I have recently been reviewing a number of Leadership and Management modules produced by the Royal College of Psychiatrists in the United Kingdom.

I was reminded during one of the modules that it was Dwight Eisenhower that developed this famous decision matrix that you may have seen once or twice in your life: 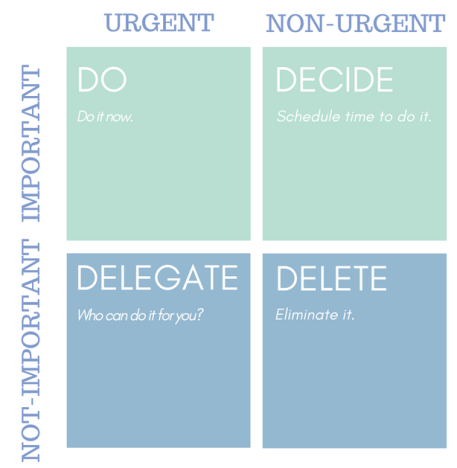 I often think that knowing how and what to prioritize is a key challenge in any transition in a medical career.  One can see this challenge for example when advanced trainees (i.e. senior residents) take on a (junior) consultant role.  Suddenly the trainee is responsible for significantly more patients with other trainees and other health professionals reporting to him or her about these patients.

The tendency is to retreat to pure medical expert role, reviewing all patients as if they were still the trainee, rather than to work through the other members of the team and more judiciously intervene.  In Organizational Psychology this phenomenon is referred to as the Peter Principle. Ken Blanchard of the “One Minute Manager” fame wrote a book about this problem called the “One Minute Manager Meets the Monkey” (which I highly recommend to readers!)

On leaving office in 1961 after 8 years as President he was famous for his warning of the rise of the Military-Industrial Complex.

Peter Drucker followed on from Eisenhower in “The Effective Executive” describing effective prioritization as requiring rules about: delegating, developing action plans, running efficient meetings and choosing “what is it that only I can do?”

For many of us, we cope with our workload by generating to-do lists.  However, the problem with a to do list (particularly an unstructured one) is that tasks rarely diminish over time as the list tends to get longer.  While items are completed, more are added. The list itself does not guarantee task completion and the visual presence of an ever increasing list can increase stress levels.

To-do lists are okay but I’d recommend adding a prioritization process or ranking process like the Eisenhower Box.  By being proactive and applying a regular discipline of prioritization you will be amazed how more control over your work you will feel. You will probably also notice that you are scheduling time for non-urgent but important activities, as well as time to effectively delegate. You may even cancel a few unimportant activities from your diary.

Image via pixabay under CC0